Only 1 left in stock

Only 1 left in stock 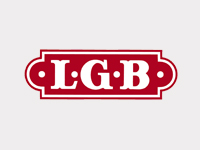 The running sounds will also work in analog operation.

This is a model of the Rhaetian Railroad class Ge 4/4 II electric locomotive, road number 629, in a special paint scheme for the new construction of the Albula Tunnel in the Grisons. The paint and lettering are prototypical for Era VI. All four wheelsets are driven by two powerful Bühler motors. The locomotive has an mfx/DCC decoder with many light and sound functions. The pantographs are powered by motors and can be controlled digitally.

The Ge 4/4 II 629 as an Advertising Medium for the New Construction of the Albula Tunnel. Since 2008, the 5,864 meter / 3.66 mile long Albula Tunnel on the route Chur – Thusis – St. Moritz has been part of the UNESCO World Heritage “Rhaetian Railroad in the Albula / Bernina Region.” It was placed into operation in 1903 and is now in poor condition. The planning of the new tunnel had to take extensive account of the importance of monument preservation with respect to all changes in the appearance of both the surface landscaping and the facilities. After the new Albula Tunnel II, which runs parallel to the old tunnel, is placed into service, the existing tunnel will be taken out of operation and converted to a safety tunnel.